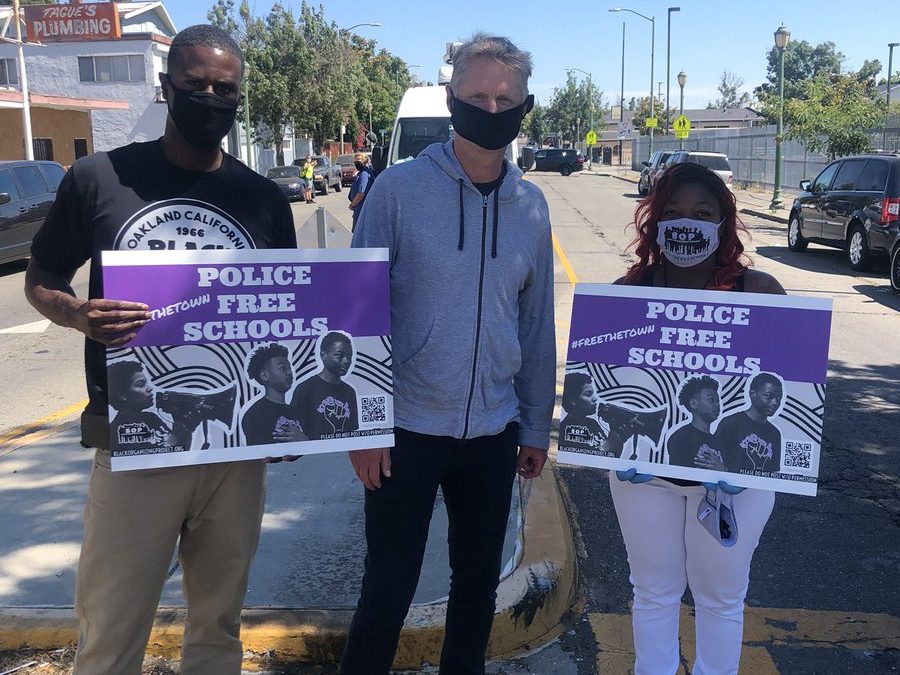 On Wednesday, June 24, the Oakland Board of Educators voted unanimously to eliminate its police department. OUSD was the only district in the county with its own school police force. This victory was the culmination of many years of work by the community and the youth of Oakland, with leadership in the past decade from the Black Organizing Project. FLY’s Alameda County Team and FLY youth who attend OUSD schools supported their work and contributed to the effort’s success.

What follows is the text of the letter delivered from FLY to the Oakland Unified School District Board of Education and OUSD Superintendent Dr. Kyla Johnson-Trammell. Alameda County youth who attend school in Oakland also submitted comments for the record at the meeting on June 24.

RE: Support for the George Floyd Resolution to Eliminate Oakland Schools Police Department put forth by the Black Organizing Project

Dear Board of Education Directors,

We write to you today on behalf of Fresh Lifelines for Youth (FLY), and the young people served by our Alameda County office in Oakland. FLY is an award-winning Bay Area nonprofit that has worked to prevent juvenile crime and incarceration for twenty years. Each year we serve about 2,500 youth who are involved in the justice system or are at risk of involvement.

For the past five years, FLY has been privileged to partner with both the OUSD and the ACOE as well as the juvenile courts in Alameda County. We teach Oakland’s students about the law and their rights, and we provide them with opportunities to develop leadership skills, give back to their communities, and work with caring adult mentors.

More than 90% of FLY youth are young people of color whose experiences with the juvenile justice system frequently start in the schools and often through violent and demeaning encounters with School Resource Officers. As BOP has pointed out, school police are “an inherent part of the school-to-prison pipeline for children and youth of color.” BOP and many other nationally recognized experts have decried the militarization of our schools and challenged us to recognize that our failed school policing policies are terrorizing, not protecting, our children.

For a local perspective, we asked our Oakland staff how our youth experience the presence of police in the schools.

Having police on campus is triggering and traumatic. Police do not make kids feel safe. They make them feel more anxious and fearful.
When youth make a mistake or react negatively to something upsetting at school, they have to be confronted by a police officer who can’t help them. They don’t get helped by a trained, trauma-informed adult.

School staff may call on the police to support situations that they may deem out of their control but policing doesn’t fix a thing. It’s just a band aid. Schools need the proper support and resources.

The need for police in schools is driven by lack of capacity and lack of other, better resources in the schools, not by violence or crime. It’s the police that are actually criminalizing our kids.

There have been many times when FLY staff could have been called to the school to support one of our young people and de-escalate a situation, but instead the police were called and the youth was put at risk.

For these and other reasons, we stand with BOP and those within the OUSD who want to address and redress the violence, injustice, and lasting harm caused by school policing. Some of that harm has come in the form of under-resourcing of the schools while millions are spent each year on maintaining a policing culture. The time is now to redirect the $2.3 million annual policing budget to strategies that will bring about a culture of learning and achievement that increases students’ safety, health, well-being, and educational attainment.

FLY as a whole, and our Alameda County staff in particular, stand ready to support BOP and OUSD in reviewing and developing these strategies. Together we can send a clear message to Oakland’s school children, their families, and their communities: We can change failed policies. We can begin rooting out racism and bias and reversing inequities. We can and will invest in your future.