FLY Program > About > What We Do > Mission & History

FLY’s mission is to partner with youth to unlock their potential, disrupt the pipeline to prison, and advance justice in California and beyond. In our work, we are accountable, dedicated, respectful, equitable and just, loving, innovative, hopeful, and youth-centered. Read about how we live out these values at FLY.

FLY’s core programs were originally envisioned by youth who were going to spend most of their teenage years, or their entire lives, behind bars. When they opened up about their experiences to our founder, Christa Gannon, their statements often began with “If only…” and ended with “I wouldn’t be here.”

The youth suggested ways to prevent other kids from ending up with the same fate as them:

After bolstering those ideas with research on best practices in youth development and crime prevention, Christa started a two-year pilot program. The pilot was so successful that when it ended in 2000, she incorporated the project into a nonprofit. The original ideas of those incarcerated youth remain the foundation of FLY to this day.

FLY is now one of the Bay Area’s longest-standing, most respected agencies working with youth who are currently, formerly, or at risk of involvement in the juvenile justice system. Over the years, our partners in the juvenile justice system have talked about the “FLY magic” and how uniquely successful we are in supporting kids to exit the system or to never enter it in the first place. Where other people only see a youth’s problems, we see strengths that can be directed toward positive, healthy participation in the community and we focus on bolstering young people’s belief in themselves.

FLY began with one staff member and a handful of volunteers serving youth in a few neighborhoods in San Jose. Now with 70 staff and more than 200 volunteers, FLY serves more than 2,000 youth throughout the Bay Area each year. Our range of programs continues to grow and today supports youth ages 11 to 24. We are also deeply involved in working for justice and equity for youth, and in changing policies and practices that created and still sustain the pipeline to prison.

FLY is led by President and CEO Ali Knight, while Christa Gannon continues to serve the agency in a formal Founder role.

FLY’S VISION FOR THE FUTURE

FLY envisions a country where all kids grow up valued and supported, and the pipeline to prison is replaced with meaningful opportunities for kids to live healthy, free, and productive lives that make stronger, safer, and more vibrant communities for us all. To understand how FLY intends to fulfill this vision, read our Strategic Plan (Imagine 2030) Overview. 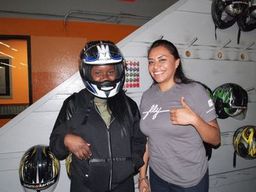